…And here you were thinking I was overaxaggerating. I might not have been raised by animals to sing Disney songs this

month, BUT I did have a great month regardless. My new nickname is Mowgli – given by a dear friend but disliked nonetheless. Why can’t a girl be a bit free with her massive curly hair and poor make-up regime, without being compared to a fictional eunuch, eh?

Anyhow, I digress: this month I appeared on the popular BBC programme Question Time, which was a laugh-and-a-half

…okay, it was a serious show featuring political prowess BUT it was as close to TV fame as I’m gonna get now that Jungle Run is a distant memory. I always wanted a bike/scooter/Gameboy colour.

Question Time was a great experience, and one that I won’t forget in a hurry despite not getting my massive gob on TV. And I met David Dimbleby (legend) who listened to my views on the control of policing despite being on his way off to the pub 🙂

Anyways, this month I also went down to the Camden X Crawl for the lovely Artrocker.tv. You can read all about my exploits with my great friend Cathryn Innocent of Cathryn photography here. The X Crawl was a great event, hence my piece, and great photos like this poser with My Passion bassist and general sweetheart Simon Rowlands ↓

I have now decided, however, that based on that experience I am never leaving home sans pen, paper and BlackBerry ever again, having made a crazeee dash to Sainsbury’s for interviewing supplies. Once and never again…I had difficulty self-scanning my items, as always…

Just to reiterate, click above for the article and read ALL ABOUT IT. 🙂

Here’s a humorous picture of me to lighten the mood of this thoroughly disjointed entry:

Shall I go blonde? Hmmm…either way, dressing as Alice In Wonderland for my friend Emily’s birthday party (British themed) was a true eye-opener to the great hair debate. Suddenly I was crazily energetic and ca

Actually, I think I look a bit like Dolly Parton myself…

I feel slightly lazy today due to flu (not of the swine variety, hopefully), so here’s something I cooked up earlier, a review of Mad Men, a show which I love so dearly. It’s in a classy font, and not-so-subtly followed by pictures of this month’s ‘Old Man Crush’, Jon Hamm. It’s a fantastic show – BBC4, 10pm, Tuesdays are the place to be for the vintage stuff (which unfortunately has to end next week as the magnificent 2nd season draws to a close)…

Mutually Assured Delight has swept over my TV screen, as I’ve prepared to stage some wholly pretentious conversations about advertising, glamour and aestheticism. Yes, I’ve been watching Mad Men for all of twelve weeks, and I’m gripped.

Dapper men (such as the gorgeous protagonist Don Draper, played by Jon Hamm), Brycreemed to the max and trying it on with their secretaries, their clients’ wives or whoever happens to be nearest to the Xerox: check. The underappreciated wives; neglected whilst their husbands devise great copy for Clearasil, or ‘spend a little time’ with the aforementioned floozies: check. The deficient 2.4 children, putting the nuclear into nuclear family, making cocktails for mummy and daddy, and being berated in a terrific style for asking such uncouth classics as “are we rich?” Check.

Mad Men has stolen my Tuesday nights and transported them into a bourgeoisie world, which smells of smoke and sex and classy instrumentals. It honestly looks like a real 1980s made-for-tv-movie set in the 50s; such is the realism, the costumery and the expert camerawork. Mad Men is the truth behind both the tension and allure of the office, and I would give anything to be part of a fantasy which includes Elnett in a starring role.

4- My new banner, which is slightly stretched but very beautiful: 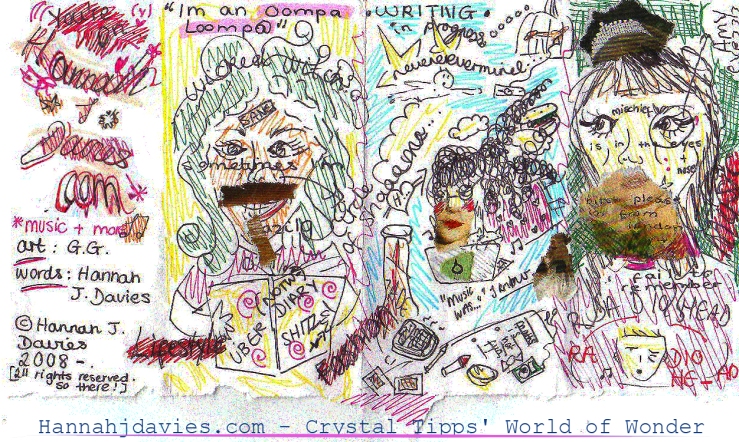 1 – Exams. I know that’s a stupid thing to say because we all NEED qualifications, but its the stress and hypochrondria that gets me!

3 – Weird coldcallers. You know who you are! I’ll ave ya for dinner!